skip to main | skip to sidebar

EVEN SANTA CAN EAT HEALTHILY 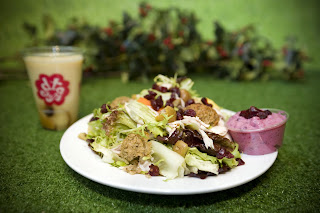 ‘Tis the season to be indulgent…and healthy too!

You know it’s almost Christmas as lunchtimes have suddenly become a lot more exciting. Sandwiches come with Turkey and Cranberry stuffing, tempting mince pies abound, but at what cost for the waistline? It is refreshing to know that you can tuck into gorgeous Christmas food knowing that is actually good for you, and without counting the calories. Christmas has never tasted so good at Tossed, the healthier eating place at Westfield London, W12. Shop ‘till you drop for all those Christmas presents, and when you need a break head for Tossed in the Balcony area, overlooking the stunning atrium.

For £12 including a glass of festive Möet & Chandon champagne and a Christmas cracker, discover pure indulgence without the guilt. The ultimate treat for a Christmas lunch ‘on the go’, Santa’s salad at Tossed is a very tasty combination of turkey, pigs in blankets, sage and onion stuffing, roast parsnip and potatoes, carrots, cranberry yoghurt served on mixed leaves freshly tossed in French dressing. It’s high in protein, low in calories and saturated fats (just 2.4g), with no added salt and nutritionally balanced, and at only 547 calories for a very large serving, this is where health meets pleasure…. in a bowl. Or ask for the veggie version, same price, 468 calories.

Pull the cracker quickly, because this is no ordinary cracker. Many of the crackers offered with Santa’s salad contain vouchers for tasty treats from the Tossed counter, from freshly made smoothies, freshly squeezed fruit and vegetable juices, to frozen yoghurt desserts, redeemable on the spot or on another occasion at Tossed Westfield only.

The Christmas salads are also available at all other Tossed in the West End’s high streets, selling at £5.95 for a large portion without alcoholic drinks (£5.25 for the veggie option).

Taking healthy eating to a whole new level with its upscale healthier foods, Tossed counts calories and nutritional content, ditches mayo and uses low GI carbs. It’s just that you wouldn’t know it because everything tastes so good. Packed with superfoods and protein, the quality, presentation and creativity of Tossed’s healthy choices is on a par with those found in restaurants.

Posted by restaurant_guru at 09:25 No comments:

DEGO' IN THE TELEGRAPH PROMOTION 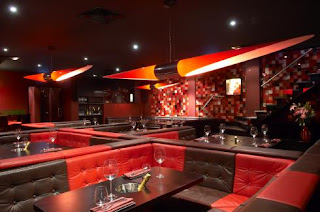 Great News! One of my favourite new restaurants was in the Telegraph Weekend and in the Sunday Telegraph as part of the new 'Eat Out' promotion. They are offering a two course meal for £15, with two Telegraph tokens. Really worth trying out if you have not yet been, great wines by the glass (it's a degustation restaurant after all) and rather good food! Go now.
Posted by restaurant_guru at 11:36 No comments:

Luisa Welch Restaurant Guru: DEGO' IS HERE - DEGUSTATION RESTAURANT: "I dont get the time to write as much as I would like on my blog these days, but when I come across something as special as Dego' - I simply ..."

Posted by restaurant_guru at 11:05 No comments:

I dont get the time to write as much as I would like on my blog these days, but when I come across something as special as Dego' - I simply have to make an exception.

It is a degustation restaurant Deg = degustation 0 = osteria. Osteria meant in the modern urban sense, not the old fashioned osteria with wooden tables and Chianti flasks hanging from the ceiling. Osteria in Italy is becoming a trendy word again, and in today’s urban Italian environment has come to mean a new interpretation of what in England we would call ‘wine bar’ – just far more sophisticated.

Behind the concept is a sommelier, Massimo Mioli, whose passion for good and unusual wines really shows on the wine list. He comes from a family of restaurateurs. Together with three partners who have also been his friends since childhood, they came to London and opened Dego’. The head chef is Dario Schiavo, young and highly talented, having already worked with Alain Ducasse and Gualtiero Marchesi. His food is quite different, both in texture, flavour combinations and style. His Suckling pig fillet with bacon served with steamed mixed vegetables and Barolo sauce is already a hit, but even something simple like chocolate ice cream tastes like velvety melted ganduja, because of the way it’s made. The food changes regularly, so if and when you go, these dishes may no longer be on the menu.

Massimo chooses the wines personally, and many are imported directly from Italy for Dego’. He is a lover of Franciacorta and takes great pleasure in explaining to customers the difference between Prosecco and Franciacorta. The Refosco from Pierpaolo Pecorari impressed me no end. Obviously coming from North East Italy, he has selected the best from the area, but you will also find the more unusual wines from the south, such as Pecorino and Falerno. He has even built a humidity controlled cellar to store his wines correctly.

Upstairs, Dego’ is a degustation bar, with many wines by the glass, all served in 125 cl for the perfect degustation experience, along with freshly cut salumi, blue goats cheese and burrata. They are also developing a ‘tramenizzeria’. (bit of a mouthful, literally), eg a place where you taste tramezzini, which are the dainty, crustless sandwiches you get in the best bars in Italy.

Downstairs is an a-la-carte restaurant and cocktail bar, with an even more extensive wine list. Based on Northern Italian food and taking its inspiration from the towns of Venice and Vicenza, the menu changes frequently to reflect the best and freshest market availability. Here, a big feature will be the ‘bigoli’, a hand made pasta from Vicenza which will be twisted at the table, before being cooked.

The décor is very sleek and elegant, styled around a red and black theme mixing lacquer, leather mosaics and soft textures on the wall for a really stunning effect. Wine buckets are inset into the tables for a striking effect, and the super modern, space-style lights add a touch of futuristic glamour.

The wine bar upstairs is open from 12 to 23.00 and the restaurant is open from 12 to 3.30 and 6 to midnight Monday to Thursday, and 6 to 0.30 Friday and Saturday. Closed Sunday (but they might open for a few Sundays in the run up to Christmas, they are too new to gauge the demand for a Sunday opening just yet).

For the full wine list, current menu and more information you can also check www.degowinebar.co.uk (don’t be put off by the word wine bar, because it’s nothing like a wine bar).
Posted by restaurant_guru at 10:45 1 comment:

restaurant_guru
I am of course the restaurant guru 'par excellance!' I specialise in restaurant PR, I hold wine tasting events, so if you are looking for the latest news on restaurants, food and drink, follow my blog!