skip to main | skip to sidebar

Cherry Jam in Notting Hill is a cool boutique bar and nightclub that attracts A-list stars as well as up-for-it party goers. Whilst it attracts a well dressed crowd, the venue is refreshingly unpretentious. Celebrity guests have included Kate Moss, Jade Jagger, Sienna Miller and Gorillaz. Private alcoves, booths and tables can be reserved at weekends with whole venue hire available during the week. I am there already.
Posted by restaurant_guru at 07:44 No comments: 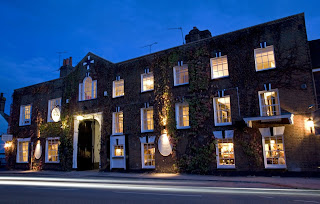 Ranging from historic hostelries to Michelin-starred inns, Surrey is spoilt for choice when it comes to great pubs. After compiling a list of ’15 of the Best Surrey Pubs for a Cosy Winter Lunch’ with the help of many contributors and industry contacts, Surrey Life magazine polled readers on line to find a winner.

The Talbot Inn at High Street, Ripley, pulled into a clear lead, gathering 7,595 votes in just three weeks, with the results announced today, Monday 7 December. General Manager Paul Dixon said: ‘Everyone at The Talbot Inn would like to thank all those who showed their support and voted for us in the Surrey Life’s poll for ‘Best Surrey Pub for a Cosy Winter Lunch’. We are simply overjoyed’.

This is the second recognition in less than six months for its standard of food. Earlier this year The Talbot Inn was awarded its first AA rosette for ‘an excellent restaurant that stands out in their local area’.

Since opening, The Talbot Inn has been causing a stir for the high quality of its food, based on seasonal, locally sourced produce, all freshly prepared. The skilled kitchen team produces food that is described as ‘simply sensational’. Modern British seasonal dishes such as its now famous Pan roasted Cornish scallops, currently offered with Spiced pork belly, pak choi and coriander & chili dressing, and its delicious Roasted rump of local lamb with ratatouille tart, confit garlic mash & olive sauce feature on the menu, alongside many pub classics such as Conisbee’s pork and leek sausages, Savoy cabbage & bacon with mashed potatoes.

The award reflects the outstanding food offer from The Talbot inn, and its philosophy of bringing top quality food into the more informal surroundings of a pub not only sets them apart but demonstrates how favourably the offer is received by its customers.

restaurant_guru
I am of course the restaurant guru 'par excellance!' I specialise in restaurant PR, I hold wine tasting events, so if you are looking for the latest news on restaurants, food and drink, follow my blog!